It’s been a glorious fall so far here in colorful Colorado.  We’ve been several times into the grouse woods this September in search of blues and mountain sharptails…we’re seeing birds and getting good dog work but I have yet to fire a shell.  My dogs have had some great points and my FB English cocker Ellie flushed 5 blues across a logging road and I never got a good shot opportunity.  Who cares?  I’ve enjoyed the heck out of it!  I love this time of year as the air gets that hint of winter and the leaves start to change yet cling on to their desire of summer to never end.  The elk bugle across the hills.  It’s good to be alive and following bird dogs.  We’ve made it to another bird season.

Karen and I returned from State College PA last Saturday and my dogs were so restless that I decided I’d get up early and head to the high country for white-tailed ptarmigan.  I haven’t hunted ptarmigan for about 10 years for various reasons.  It’s hard to find them and Colorado is full of active people hiking above the tree-line that truly frown upon shooting sports and nimrods in general.  Yep…they literally want that Rocky Mountain High!

White-tailed ptarmigan are native to Colorado’s subalpine tundra that exists above the tree-line…11,500 ft or so here in Colorado.  They are also native to Alaska and Canada above the tree-line.  They have been transplanted successfully to other states like CA, OR, and Utah in areas with similar habitat.  They are a very interesting and tough bird to live at such extreme elevation.   The air up there lacks a few O’s.  They can pick up and fly from one 14,000 foot peak to the next in a moments notice which can make them seem like they’re here today and gone mañana.  Thus…they have a very dark but delicious breast meat.

We arrived at our destination before the sun had crossed the great divide…it’d been in the 90’s in Denver the past few days but was actually < 40 degrees Sunday morning making it perfect for ascending 2000 feet up with the dogs and shotgun.   I filled my water containers and placed the Garmin collars on the girls.  I retrieved a couple leashes so that I could walk the girls for the first couple hundred yards to avoid incidents on the major road below.   Thank heavens there were no tree huggers parked in the immediate area.  We started our ascend above the tree-line.

Cinder was quartering nicely in front of me and Gretchen at 11.5 yrs old was gone…she was taking a nice cast off yonder.  Cinder quartered off into some willows and encountered her first porcupine…it surprised me that they too are found about the tree-line. 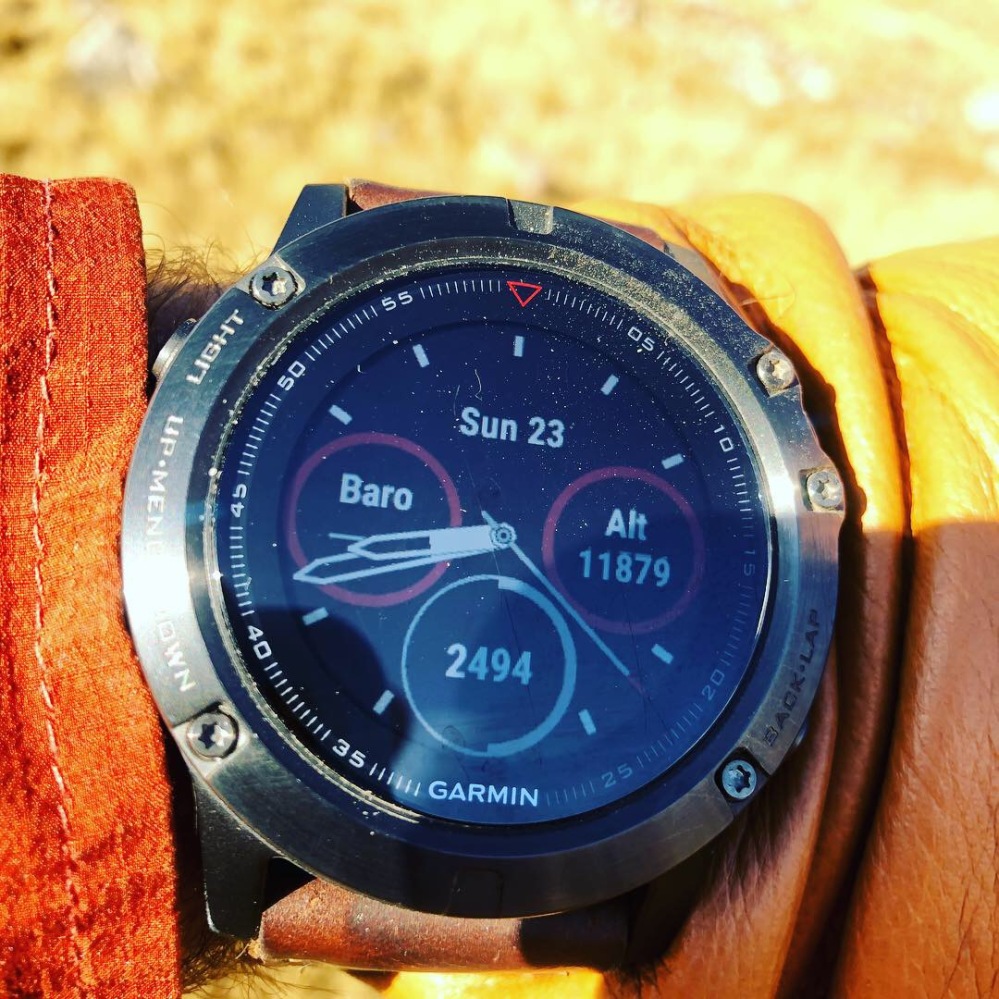 I pulled the quills I could remove by hand and we proceeded onward and up.  I’ve found most of the ptarmigan at about 12,500 feet in elevation where there are boulder fields and subalpine stunted firs. 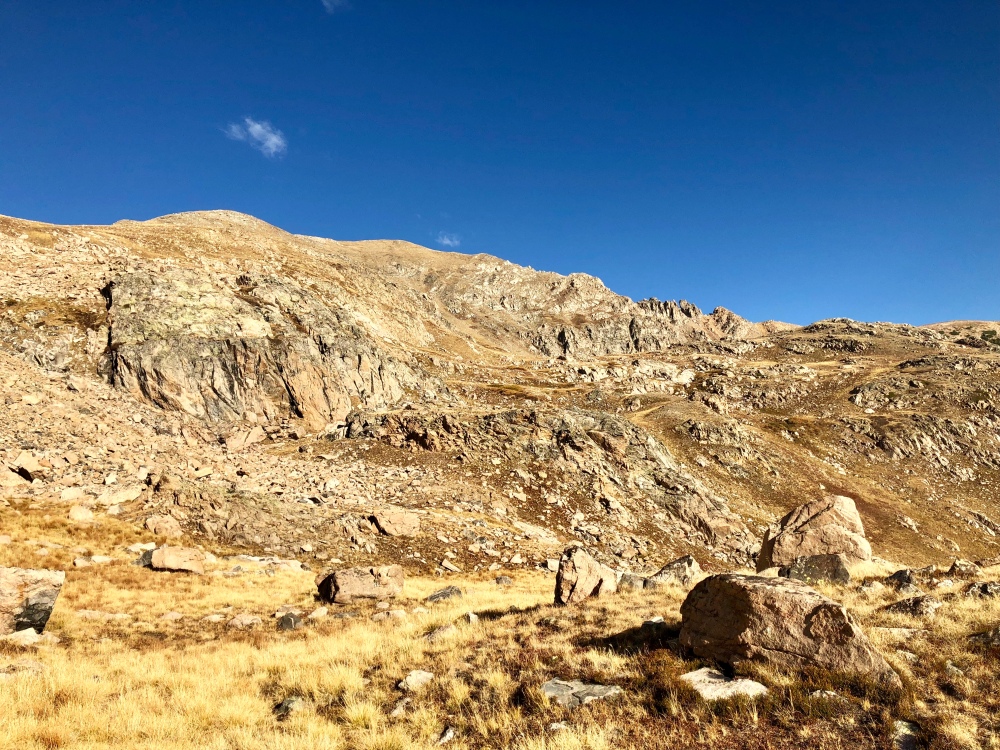 I was climbing and thinking about my patients and their surgical procedures scheduled for the following day when my Garmin Alpha vibrated indicating Gretchen was on point ahead of me.  Gretchen was about 150 yards to the north ahead of me…moving at 12,500 feet is like traversing on the moon.  I quickened my already slowed pace hoping to get to where Gretchen was before the birds decided to blow out of there.  I spotted Gretchen about the time 3 small white birds burst from the boulder field.  Damn!  I started to high step it in hopes that there was a few stragglers.  Gretchen had moved on and was 50 yards below me.  Suddenly another white bird rocketed up right between my feet headed for the boulder field.  I made a nice right to left crossing shot with my 1927 Ithaca grade 1 NID .410 and the bird folded in the boulder field.

Ok…so here’s where it gets stupid!

I thought to myself that I should set down my beloved .410 and traverse the boulder field empty handed but pride overhauled reason and I went into the field with my gun in tote.  Ten feet into the field and I was face down in the rocks…having slipped or tripped and who-knows-what-face-first landing on my beloved Ithaca.  The gun might have even saved my fall…a bit.  Graceful it was not!

Slowly, I got to my feet and looked at the gun…damn!  I gained my composure and grabbed the bird and headed back out of the boulder field.  I was thankful that nobody was around to watch my antics (or my crying).

My Garmin vibrated again and I noticed Cinder on point over near some stunted firs and then watched more ptarmigan flush.  I noted the right barrel was severely damaged but the left barrel was ok.  I decided to try and harvest another ptarmigan with the left undamaged barrel.  Gretchen was putting up birds 30 yards below me so I worked slowly down towards her.  Anther bird presented a straight away and I pulled the single Miller trigger twice to get the left barrel to fire and the bird hit the ground.  Cinder made a beautiful retriever to hand.  I missed the next two or three birds and finally connected with a third bird to complete a Colorado limit.

I texted this photo to a couple of friends and my good friend Bret called me to say congrats.  I described to Bret what had happened and he asked if I was ok to hike back down to the truck.  Duh, I hadn’t thought about that because of the birds.  My right knee was throbbing and my pants were blood-soaked, my right 5th finger was swollen and so was my left forearm.

I painfully worked my way to the truck passing a few tree-hugging, nimrod hating hikers on the descend.  Andy called me on the drive home and I gave him all the details about the hunt and how bummed I was about ruining my .410.  Andy cut me off and proclaimed hey! don’t you have insurance on that gun anyways?  Ha!  I started to laugh.  Yes sir…I had the foresight to get USAA to insure all my guns against theft and damage…even idiot cross a boulder field at 12,500 feet damage!  I can say that USAA has been incredible about this.  I have the gun scheduled to go to a renowned gunsmith from AZ and CO who specializes in classic American double guns.  USAA will cover the entire cost.  Thank Heavens! 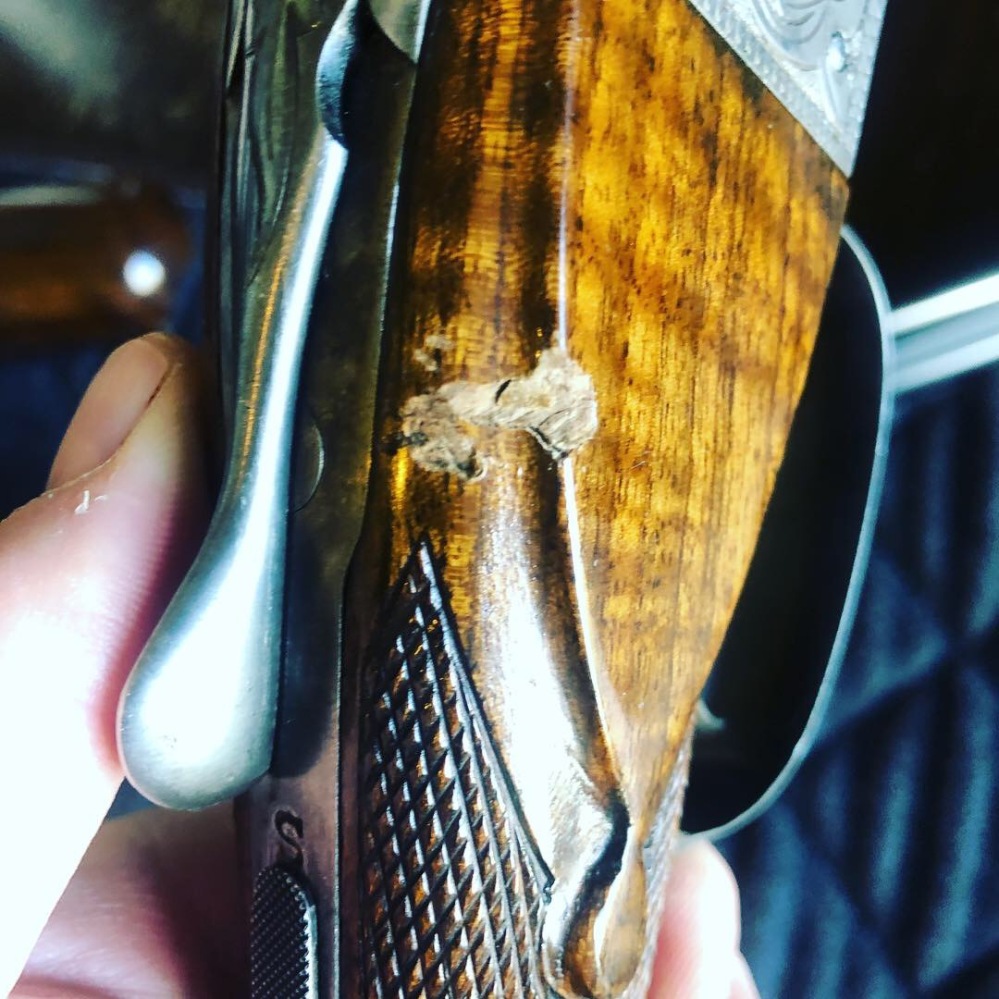