Skip to content
Call me nerdy, but I am always interested in learning about the meaning and significance of a person’s name. For example, I learned that my name, Andrew, comes from the Greek word, andreas, which means “of a man.” Yep, that pretty much covers it: I am very manly, after all.

My oldest nephew Josh’s name, on the other hand, has an altogether different meaning. Get this, in Webster’s, the word “josh” means: “To tease without malice.” How fitting! I must confess that, since his early childhood, my brothers and I have spent plenty of time joshing our beloved nephew. To give you an idea of my character in high school, I was a loud-mouthed, punk-rocking, long-haired, skateboarder (those who know me now can’t believe it when I tell them this, but it is true). With my own little brothers growing up quickly, it was nice to have some fresh meat to tease. And Josh was an easy target.

Joshua Clark poses with an 21 inch brownie he caught on Silver Creek during the famous brown drake hatch. The rest of us got skunked.
For example, there was one time when I put on a gas mask and terrorized Josh and my niece, Kyli, who were trespassing in my room. Needless to say, their parents were very ticked off. Also, we always gave little Josh a hard time for his speech impediment: “Jampa, can we hab sum foden yodut?” (Have fun figuring that one out!). When Josh was four, he got a bow and arrow for Christmas and we talked him into shooting the cat. Rear! Good times! Oh, and one can never forget the time while deer hunting when Josh got car sick because of the winding mountain roads and blew chunks in a yellow, plastic baggy while Grandpa’s car stereo crooned, “Cryyyin’ over you” by Roy Orbison. Arggh, I’m in hell! As you may guess, we nicknamed Josh, “Ralphy” after that episode. Josh took all of this (and much, much more) in good spirits.

Sometime during 2001 after Josh became a teenager, my sister Shelley, Josh’s mom, went through a difficult divorce. In need of strength and support, Shelley moved with her four boys to Rupert, Idaho to be closer to my parents and to start a new life. At the time, Josh’s passion for the outdoors began to blaze and he came on as many hunting and fishing outings with me as he could. Heck, I couldn’t have left him home if I wanted to! In all actuality, it was my pleasure to take him along and to witness his newfound enthusiasm for the outdoors. 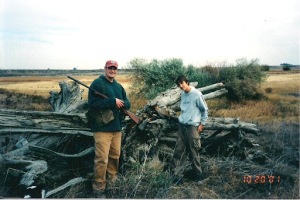 One fall morning in 2002, Josh, my brother-in-law, Eric, and I went grouse hunting at one of our favorite coverts, Grouse Rock. Due to the scarcity of birds, we all decided to go and try to catch a few fish. In order to protect this little gem of a creek, I will not disclose its real name. Since this story is primarily about Josh, we’ll call it “Joshua Creek.” The first time I saw Joshua Creek, I did not consider it as a trout stream, in any sense of the word, because it looked way too small and too narrow. I had much to learn! 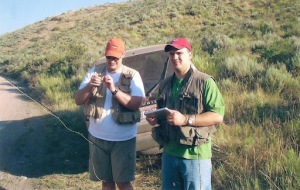 Eric and Andy rigging up to fish Joshua Creek.

This winding little meadow stream is totally spring fed and despite its narrow, shallow appearance, it is deceptively deep in some places. The spring flows cause watercress to grow abundantly in the creek’s channels, which gives the creek the appearance of being narrower than it actually is, and also provides good cover for surprisingly big and wary brown trout. The first time I fished it, I instantly loved the creek because of the number of its inhabitants and the technical difficulty it presented.

This little creek has to be fished upstream only. If you carelessly walk along the banks, you will witness multiple wakes of spooked fish. To say that you need stealth in your approach is an understatement. Also, you have to make long, precise casts, which are often snagged by the surrounding sage brush or trees aligning the creek’s banks. With all of the vegetation around the narrow creek it is difficult to get a long, drag free drift. However, most of the time, a drift of a foot or two is plenty as the resident browns will pounce on a decently presented fly.

When fishing this creek, my family usually uses a grasshopper pattern, my Dad’s red-butted double Renegade, or a Turks Tarantula. It is dry fly fishing at its finest because you can usually see the fish wake towards your fly and smash the terrestrial patterns. Did I mention that I love this little creek?

The author fights a spunky brown with a 3 weight on Joshua Creek. (Boy, I was packing a few more pounds back then!)

After our bird hunt that spectacular September morning, Eric, Josh and I traveled the short distance to Joshua Creek. Of the three of us, I was the only one who brought a fly rod, my sweet little St. Croix, Ultra Legend, 3 piece, 3 weight, that my Dad and I built in April of that same year. This fact did not bother me, however, as I find that it is just as much fun to fish together, take turns with the rod, and watch each other fail or succeed as the case may be.

Eric, Josh and I quickly laid down the ground rules that each of us would have a turn with the rod until we caught a fish, at which time, the rod had to be handed off to the next eager participant. For those more skilled at catching fish (I won’t mention any names), this meant that you did not get that long of a turn. Anyway, while the others were fishing, it was fun to give them a hard time about their fishing skills (or lack thereof). On the flip side, when you were the one in the hot seat, the teasing put tremendous pressure on you to do well.

Uncle Andy fishing the very stretch of Joshua Creek in the story. In fact, that brush on the right side may be the very brush that Josh snagged the fly.
After we had caught a few fish, it was once again Josh’s turn. Right off, he snagged the last of my Turks Tarantulas in a thorny rose hip bush on the far bank of the creek. There was no way to get to the entangled fly other than crossing the creek, which meant getting wet. Of course, Eric and I chastised Josh and told him he better get the fly unloosed or we would either have to find another pattern that worked or call it quits for the day, which none of us were ready to do. Josh carefully applied pressure to my little rod and the fly miraculously came loose.

However, Josh then went on a streak of missing fish after fish after fish. He must have missed at least ten fish in a row. Josh’s performance was what my four year old son Thomas, would proclaim, “Torrible” (which is a mix between the words “terrible” and “horrible”). All the while, Eric and I were giving him a hard time. Finally, Eric demanded, “That’s it! You’re done! Hand over the rod and let me show how a real man fishes.” In frustration, Josh surrendered the rod to Eric and said, “Here, have at it.” As if by poetic justice, Eric then proceeded to miss multiple strikes in succession.

Pulling my hair out in frustration for the desire to recommence fishing after a lengthy delay caused by rank amateurs, I exasperatingly proclaimed, “You guys stink! Give me that rod so I can show you both how it’s done!” A newly humbled Eric surrendered the rod back to me.

Confident, I cast the fly up into a likely looking run and a fish rose up and snatched it from the surface. I calmly set the hook, but the fly instantly came loose. Surprised I exclaimed: “I just pulled a Josh!” I then proceeded to miss about five fish in a row. I was dumbfounded! I could not believe that I—of all people—could repeatedly miss that many fish. Now Josh and Eric, on the other hand, were a different story altogether; I could understand that. But me? No way! Meanwhile, Eric and Josh were laughing and poking fun at my fall as the mighty fisherman: “Watch and learn he says. . . .”

After a few more unsuccessful attempts, I thought: Something has to be wrong! I then placed the rod between my legs and pulled the fly up to my eyes for a closer inspection. I instantly observed that the fly’s hook had totally broken off at its bend when Josh had yanked it free earlier. Otherwise, the fly looked perfectly normal, which is why we did not notice it before. When I proclaimed my findings to Josh and Eric, we all roared with laughter. We had been fishing for over ten minutes with a broken fly that would never hook any fish. This crazy experience has come to be known by those involved as, “Pullin’ the Josh,” and we all still laugh about it often.

To sum it up, the many hunting and fishing experiences I shared with Josh are some of my all-time favorite memories. I miss those days. Now, I have a confession to make. I was just joshing you about the real meaning of my nephew’s name. It is true that the word josh means “to tease without malice.” However, the name, “Joshua,” means something else. I looked this name up in the Bible Dictionary and found that it is a Hebrew word meaning: “God will help.” Indeed, I can state from firsthand experience that He is mindful of each of us and that He will help us through our individual trials if we seek Him.

During the many hunting and fishing adventures that we shared, Josh never spoke openly of his parent’s divorce or let on to his true feelings, but I suspect that, as the oldest of four brothers in his broken family, he struggled greatly on the inside. I can only hope that he found some peace in the coverts, rivers, and streams of our outdoor adventures. I don’t know for sure, but I suspect that this was one of the ways that God helped him to weather those tough times in his life. Maybe this was Heavenly Father’s way of “pullin’ the Josh” to Him. 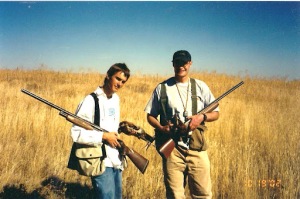 Josh and Uncle Andy on a memorable pheasant hunt.

Thanks for the memories buddy!