Skip to content
On day three of our week in the Idaho uplands, Shawn and I traveled up to Hemingway country, not far from Sun Valley, to look for chukars. In this rugged rimrock landscape, we found hundreds of chukars the November before. So we had high hopes for the day, especially after our banner day of quail hunting the day before. 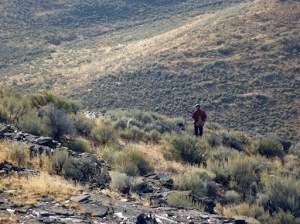 Although we hunted hard and searched high and low, we did not see a single bird. We decided the birds were still spread out and would not migrate to the southfacing slopes until the first hard snows. Pursuing chukar was a bit premature last October.

Shawn Wayment enjoying the scenic rimrock country.
The highlight of our day was stopping at our favorite taco joint in Bellevue, Idaho: Taqueria Al Pastor. I would venture to say that not only does this little restaurant make the finest tacos in the Wood River Valley (they have an award to back it up) but maybe even the world. When asked the question, Shawn conceded that these were the best tacos in the world.

Shawn confesses with a grin that these tacos are the best he’s ever had.
After lunch, we could have fished the Big Wood River, which I love dearly. I love to fish as much as I love to bird hunt. However, when the hunting season begins, my focus turns singularly to bird hunting with my Brittanys. In a word, I become a Bird Brain. It’s a good thing the hunting season only comes in the fall, or I wouldn’t amount to much in life. As William Harnden Foster so aptly stated: “There is an old . . . saying to the effect that if you give a man a shotgun, a bird dog and a violin, he won’t amount to a damn.”

Shawn and I decided to take to the high country in search of blue grouse that afternoon. Again, we hunted hard, but did not see any birds. In Reflections on a River, Howard Marshall wrote something about fishing, which I think applies equally to bird hunting: “Fishing [and bird hunting] consists of a series of misadventures interspersed by occasional moments of glory.” In other words, the nature of our outdoor pursuits is such that we can’t expect to have banner days every day.

Blue grouse country in Central Idaho.
But even without any birds, I still do not count this day as a loss. I love what Ted Nelson Lundrigan wrote in A Bird in Hand, about hunting: “Our bird hunting time is precious. I have already written that the greatest trophy I can get from any day in the woods is six hours without a care in the world.” I agree. Who can complain when you get to spend a day in beautiful country with your brother and best friend and your bird dogs? My friends, the birds are just the bonus! And even on those days when you can’t find a single bird for all of your efforts, there’s always tacos.

Feast your eyes upon the best dang tacos in the world.