No, I’m not talking about Bill Murray’s character in that annoying movie. And no, I am not now playing for the other team. But I am thinking of a gentleman from the prairie: Mr. Bobwhite. 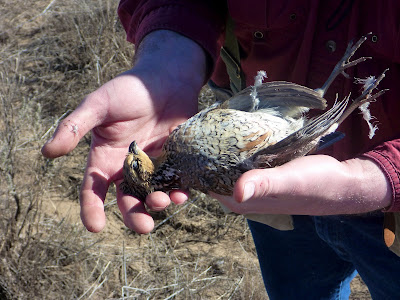 A beautiful hen bobwhite.
This past January, when the snow was piled high and Idaho’s bird hunting seasons were all but over, I had the good fortune of traveling to Kansas, the Prairie State, with my older brother and fellow Upland Equations Contributor, Shawn Wayment, to pursue pheasants and bobwhite quail. As far as the hunting season goes, it was like rolling back the clock to sweet September and October with temperatures in the 60’s and 70’s. While the birds were scarcer and warier because it was the last week of the season, the dogs found birds each day and we got some shooting in.

Sunny Girl backs two pointers on the edge of the junk yard.

As far as the scenery goes, it was like stepping back in time to a different era. For three days, we hunted in wide open country dotted with abandoned homesteads. Most of these homesteads had old picturesque windmills and many hosted their own covey of bobwhites, the object of our pursuit.

We looked for the resident covey at this old homestead, but they weren’t home. With the warm temperatures, they must have been on vacation.

While we hunted both pheasants and bobwhites, our host, Casey Mader, let us know succinctly where his loyalties lay: “Coveys are for countin’ and pheasants are for killing.” By this, he meant that coveys of quail were only to be shot into if there were more than eight birds. Casey’s goal was to make sure that each covey had plenty enough to keep the quail population up for the season to come. The sheer number of birds that we saw (ten coveys in three days, some with fifty birds or more) was a testament to the fact that his vigilance works.
While hunting some rolling sand sage hills with Shawn and Casey on the second day of the hunt, I headed back toward the vehicle to water my dogs because of the heat. Afterwards, I hunted a new area across the two-track road and noticed a little divot in the landscape choked with a tumble weed called “thistle” by the locals. Casey mentioned earlier how much the birds loved this weed both for protection and for food. Once in the weeds, I immediately began to notice quail sign: droppings, feathers and tracks, which caused the heart to race with excitement.
The young Brittany pup, Misty, quickly got birdy and gave me enough notice to get ready. A huge covey of thirty-plus birds flushed in unison from the edge of the thistle patch and I dropped one with the bottom barrel and missed another with the top barrel. The older French Brittany, Sunny Girl, retrieved the bird to hand. Although Misty did not point, I was still proud of her for finding the birds. 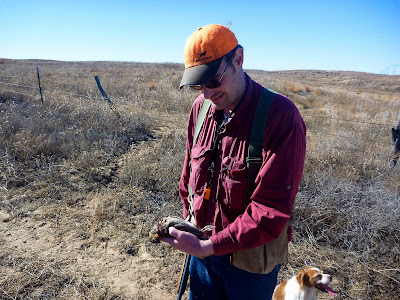 Admiring the bird after Sunny’s retrieve.
Back at the truck, the temperature showed an unbelievable 77 degrees, which is really too hot for good scenting conditions. Notwithstanding, this experience and the trip, especially in the dead of winter, are things of bird hunters’ dreams.

Check out the temperature in January! Unbelievable to this Idahoan.

The following day we learned that we were coincidentally hunting in Kansas on its 150 year anniversary. I can think of no better way to celebrate the birthday of the Prairie State than by pursuing its finest, native game bird, Mr. Bobwhite.

• The quail hunting season in Kansas starts on the second Saturday in November and goes through January 31st. Kansas has both bobwhite quail and scaled quail and there are areas where the two species overlap.
• An out-of-state hunting license for Kansas is $72.50 and the license covers a calendar year. So if you buy a license in January, it’s good for the following fall.
• Kansas has a walk-in program for private property and there is more huntable ground than you can imagine. Look for the WIHA signs which designate such properties.

• For late-season quail, 7 ½ shot is plenty, but for late-season pheasants, don’t use any smaller shot than size 6.
• Casey Mader gave us an interesting tip: “Where there’s dove, there’s quail.” Interestingly, any time I observed numerous doves, there were usually coveys of quail in close proximity.
• There is no finer game bird for a pointing dog than the bobwhite quail, hence the reason he is often referred to as a “gentleman.”
• On the other hand, the ringneck pheasant is a dirty rotten scoundrel and a hard-charging flusher or retrieve

r is the better breed.
Kansas is the place of a diehard bird hunter’s dreams. I can’t wait to go back!