If you have followed the blog for awhile, you may recall that I have mentioned a few times the struggles of trying to get one of my first bird-hunting stories, Grouseketeers, published. This story is about the highs and lows of my son Thomas’ first blue grouse hunt with me when he was only four years old. 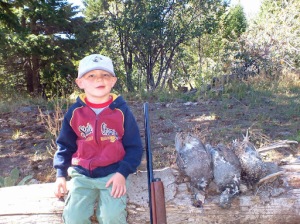 I first sent this story in to The Pointing Dog Journal back in the Fall of 2008. The editor liked it but was not interested in publishing it in its original length, which was 2000 words. Instead, he asked me to revise it to 800 words and resubmit. I did so, but I felt the story was so butchered that it lost its essence. At the same time–on a whim–I sent in the story of my first birddog, Rooty, which I first published on this blog. Lo and behold, The Pointing Dog Journal accepted Rooty instead of Grouseketeers. I was excited for Rooty to be published, but bummed about Grouseketeers at the same time. It was like having someone pick one of my kids over the other.

Notwithstanding, I did not want to give up on Grouseketeers. I sent it to many other outdoor magazines and experienced multiple rejections, some of which were very harsh. I will not mention any specifics, but it stung some. However, one patient and encouraging editor liked the story, but had me edit it two separate times over a year period. So my hopes for the story lived on.

Today, after a stressful day of work, I got the email that every writer loves to receive. In short, Grouseketeers will be published in The Upland Almanac. I’m not sure exactly when, but it has finally been accepted. After two years, my perserverance has paid off. All I can say is: Never give up!

I will let the blog followers know exactly when it is published. I hope that everyone will appreciate this story of a dad, his two birddogs, and his only son on his first bird hunt. More importantly, I hope it will inspire others to get the youth involved in our awesome sport of upland bird hunting.