My brother and co-contributor to this blog, Shawn Wayment, recently wrote about the most unsportsmen-like conduct he ever witnessed afield. To get the full account, check out “Birddoggin’ Days” at http://www.birddogdocschronicles.blogspot.com/ . In short, Shawn’s setter, Gretchen, was pointing a covey of quail in a remote area of a public walk-in area and three hunters (with six bird dogs of their own) not only intruded on my brother’s hunt, but arrogantly flushed the covey of quail under Gretchen’s point while blasting away at the covey. Is nothing sacred? I don’t know about you, but that kind of stuff really gets my blood boiling.

Shawn’s story inspired me to share one of my own. More than once, I have written in this blog about my favorite covert, “the Royal Macnab.” I named this covert after one of my all time favorite outdoor stories by Robert F. Jones called, “The Royal MacBob,” because this property has it all: Deer, ruffed grouse, hungarian partridges, pheasants and my personal favorite, sharptails. I love this special covert more than any of my other hunting spots and I am very protective and cautious about who I take there.

Shawn and Ellie, his FBE Cocker, early morning on the Royal Macnab. Ain’t that pretty?

In the fall of 2003, I took a long-time friend (who shall remain unnamed) with me to the Royal Macnab. As we drove there, I swore him to secrecy: “Promise me that you will not tell anyone about this spot.” “You know I won’t man,” he pledged. That glorious fall afternoon we both harvested our limit of sharptails, which is two birds a piece. As the sharpie season only extends through the month of October, this was the last sharptail hunt for me that year.

The black and white Brittany is Sunny’s sister, Hally. We had an awesome hunt that last Saturday in October of 2003. I love little shag carpet Brittanies! 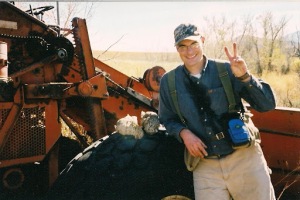 The following fall of 2004, I couldn’t wait to head back to the Royal Macnab for more of its magic. Early in the morning of opening weekend, I drove south with Sunny, my French Brittany, and Dusty, my newly acquired pointer. When I arrived, I had the place all to myself as I fully expected. The brilliant sunrise that morning over the mountains to the east was unforgettable.

Even Bustin’ Dusty felt that it was a special day as he uncharacteristicly worked birds in range. In fact, as we crested one of the bigger hills in the rolling CRP fields, Dusty cranked down on point and a sharptail flushed in range flying right to left. I swung out well ahead of the grouse and dropped him like a stone. This was the first bird that I took over one of Dusty’s points.

Opening Day 2004, with my first bird taken over Dusty’s point.

Not long after the first sharpie, I recieved an unexpected phone call from the same friend I had taken to the Royal Macnab the year before. Come to find out, he had brought his Father-in-law and two brother’s-in-law to my cherished covert. When he saw my Ford Escort station wagon, he decided he had better call me to let me know they were there. At the time, the fact that they showed up did not sit quite right with me and I tried to shrug it off as no big deal because of my long history with this friend. I ended up meeting with them and hunted an hour or two with the culprit. We all harvested a few more birds that morning.

Since that day, I have reflected numerous times on this experience, which left a bad taste in my mouth. Because of my friend’s breach of trust, I haven’t hunted with him since. My good friend Matt Lucia and I have talked about this negative encounter and we both agree that one of the most important ethical rules for a sportsmen to follow is this: Once a friend takes you to his secret hunting or fishing spots, you never go back without that friend’s knowledge and blessing. Good hunting spots and good friends (who share these treasured places with you) are hard to come by. Don’t blow a friendship by treading on his generosity.

Of course, this is only one of many ethical standards that we as sportsmen should set for ourselves. Other ethical guidelines are:

1. Abide by the game laws and never harvest more than allowed by law. Don’t be a game hog! In fact, if the limit is generous, you may even consider taking less than the limit to preserve the resource.
2. If someone has already staked out a public spot to hunt, then honor his claim and give him some space. Never, ever intrude on a stranger’s hunt by flushing a bird that his dog pointed.
3. Ask for permission to hunt private property. If you don’t, you may burn that bridge forever.
4. Clean up after yourselves both in public and private property. Enough said.
5. Never shoot close to homes, buildings, or livestock. I can’t tell you how many landowners have turned me down when I asked to hunt because someone shot their cows.
6. Close gates behind you.
7. Don’t yell at or try to discipline your hunting companion’s dog.
8. Eat what you kill. Put another way, only kill what your going to eat.
9. Safety first. Always handle your firearm safely!

Keep in mind that the nonhunting world already considers us as bloodthirsty neanderthals. It sure doesn’t help our plight when we act uncivilized towards each other, landowners, or their property. To sum it up, I believe that it is absolutely essential that we, as sportmen, establish personal ethical standards that we live and abide by in the field. I am a firm believer that the ethical pursuit of outdoor sports can help bring out the best in all of us.