Skip to content
By Andrew M. Wayment
Man, so far, this has been the toughest hunting season I can remember! With the long, harsh winter, the blue grouse broods did not fare well. I’ve found very few blue grouse and when I have, they’ve been in groups of ones and twos―no big broods as in years past. The birds have been extremely jumpy and have not held well or presented good shots. For the most part, I’ve been unable to capitalize on the few opportunities I’ve had. The ruffed grouse have done a little better, but with the thick foliage the good hunting for them does not start until later in October.
In addition to the scarcity of birds, I suffered another setback to my hunting season. After a grouse hunt that I dubbed the “Siberian Death March” because I hiked high and far and saw no birds, my Subaru Legacy Wagon began to make a scraping or grinding noise on the way home that sounded like I was dragging a Christmas tree under the car. I later found out from my mechanic that the transmission is going out and that it will cost more to fix than the car is worth. Using a cost/benefit analysis, I just couldn’t justify the cost. With gas prices so high and my only remaining vehicle being a gas-guzzling GMC Yukon, I realized that this would seriously cramp my hunting the rest of the year.
If that were not bad enough, it seems that the elements have conspired against me. The first part of the season in September was really too hot for good hunting and scenting conditions. Likewise, October 1st, opening day of sharptail season, was a real scorcher and my favorite cover, the Royal Macnab had been royally macmowed by the landowner leaving very little cover for the once plenteous sharptails. This scene was another blow to an already discouraged bird hunter. 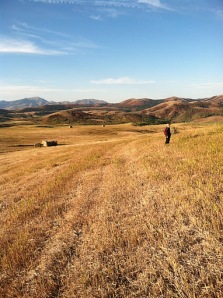 Tommy at the Royal MacMowed.

Last week, I planned two hunts (Thursday and Friday) for sharptails and both had to be canceled because of the unexpected downpour of rain and snow. Still determined, I headed for a favorite mountain covert Saturday morning believing that the change in the weather would push the blues up to a higher elevation where I’ve found them in the past. However, to my surprise, I found a foot of fresh slick snow up top of the mountain. I don’t mind hunting in the snow so much, but when I saw the armies of fluorescent orange-clad deer hunters (because it happened to be opening day of the deer season), I realized that this was no place for me or my three bird dogs. So I retreated to a lower elevation below the snow line and had a nice, birdless hike with the dogs in thick fog. Yep, it has been that kind of a season for me thus far. Murphy (of Murphy’s Law fame) has had his way with me. 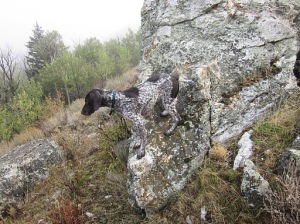 Brandy, a new member of the team. Notice the thick fog in the distance. There were times when I could not see more than twenty yards.

I recently came across an applicable scripture in the Bible, which I found intriguing. To set the stage, everyone knows David from the story, David and Goliath. As you may recall, King Saul became so jealous of David that he actually began to seek his life and hunt him down. One evening David snuck into the camp of King Saul and could have taken his life and ended it there, but would not because Saul was the Lord’s anointed. Instead, David took the King’s spear, went off a distance, and called out to Saul’s camp. David pleaded for the king to quit hunting him and pointed to the king’s spear to show him that he had spared Saul’s life. Among other things, David said something that pertains surprisingly to bird hunting: “Now therefore, let not my blood fall to the earth before the face of the Lord: for the king of Israel is come out to seek a flea, as when one doth hunt a partridge in the mountains.” (1 Samuel 26:20).
Boy, after the start to the hunting season, I know exactly what David means. Finding birds and bird hunting in general can sometimes be very difficult. Apparently, they’ve known this since Bible times. This year, finding a partridge in the mountains has been like trying to find a flea in the wilderness―the proverbial needle in a haystack.
But I’m not ready to give up just yet. I’ve written about it in the past, but for me, hunting is an exercise in hope (See “Hunting is Hope” in Upland Equations archives). Every time I go afield, I hope for good things to happen for me and the dogs. As my season to date clearly illustrates, oftentimes they do not. However, sometimes great things occur; the birds are plentiful, the dogs work wonderfully, and the old shooting eye comes through. Good or bad, every hunt is an adventure fueled by hope. As the saying goes: I’d take a bad day of hunting over a good day of work anytime.

How can you not experience hope when seeing such beautiful sunrises?

In truth, hunting for me is the opportunity to set aside the stresses of the day and to step into the natural world and feel like a wide-eyed kid again: you know, that feeling where everything is beautiful, everything is amazing, everything is a miracle. That’s why I hunt. Even a tough start to the season cannot take that feeling from me or make me want to experience it any less.