Skip to content
Author’s Note: A shorter version of this article first appeared in the Post Register in Eastern Idaho in the fall of 2010.

Shawn gets Ellie, a firey fieldbred Cocker and Gretchen, an English Setter, ready for the day’s hunt.
DAY TWO: STAY THE COURSE
After going to church and spending time with family on Sunday, when Monday rolled around Shawn and I were again itching to take to the upland road. Our destination in western Idaho was a place we fondly call, “The Trail to Quail,” and for good reason. In the past we have found piles of quail—more than most bird hunters can imagine—and sometimes a few bonus coveys of Huns.

This is the view from the top of the Trail to Quail. . . Beautiful.
In my experience, there’s bird hunting and there’s valley quail hunting, which is a different show altogether. When quail numbers are high, the sheer number of birds can be astounding, especially for a first timer. Moreover, these beautiful, gray birds are strong, acrobatic fliers and make for challenging targets.

Having experienced this challenge, frustration, and fun, numerous times in the past, Shawn exclaimed a as we approached our destination, “Man, I am nervous!”

The intricate patterning of feathers and dark plume of a cock valley quail is hard to beat.
Within five minutes from the truck, the dogs flushed their first covey from a brushy hillside and Shawn harvested his first bird. It did not take long for us to realize as we worked down a brushy creek bottom that 2010 was a banner year for quail in western Idaho, which are very sensitive to harsh winter and spring weather. By all appearances, Mother Nature had been kind to the topknots this year.
While all of the other dogs were too supercharged at first to settle down and hunt, the old veteran, my French Brittany, Sunny Girl, started pointing birds regularly as we worked a big covey down the draw.

Sunny Girl points a covey.
“I love that dog!” Shawn exclaimed in admiration, “She is all heart.”
Fortunately, I made a good shot over one of her points and Ellie, the field bred cocker made a nice retrieve to Shawn.
When we got down to the bottom of the draw, the dogs flushed what we like to call a Chubby Covey—easily over 100 birds—out of a crab apple thicket. The birds passed in waves as we stood gaping. I couldn’t help but think: This is going to be a red letter day!
Believe it or not, we did not follow after the big covey at first. You see, there are numerous finger draws on the opposite side of the valley where we have had tremendous success in the past. We figured we would leave those birds for later. This turned out to be a good strategy as Shawn’s dogs located a nice covey of Huns up one draw and Shawn harvested one.
“Andy, I know right where that covey went. They are right over the crest of this hill. Why don’t you, Sunny and Misty go after them?” Shawn generously offered. “I would not approach them directly on, but hike around the side of the hill and then walk the ridge with your dogs working the cover on the downhill side.”
“That sounds like a good plan.” I eagerly replied. By way of confession, of all upland game birds, Huns are my nemesis. At the time, it had been nine long years since I had harvested one. In short, Huns are the fastest dang birds on wing and–despite all the press to the contrary–I have not found them to be very gentlemanly. They very rarely hold for a point and flush wild more often than not. That’s when I typically give them the two barrel solute. I call this common occurrence in my hunting being: Hundone.
We followed the plan of attack suggested by Shawn to the “T” and when we approached the downhill side of the slope Sunny got birdy, with the pup, Misty right behind her. Sunny pointed for a split second and the screeching covey flushed presenting me with a right-to-left crossing shot. I swung and pulled the trigger and surprisingly the bird dropped. The pup chased the fluttering bird down and made a nice retrieve. Every member of the team was in on the action. As I walked over the hill down to Shawn, I raised the fallen bird over my head victoriously. 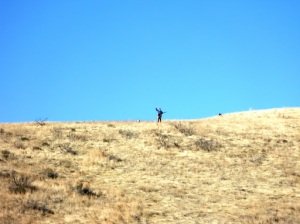 The author celebrates a rare Hun as he crests the hill.
“All right!” Shawn cheered. Of course, we took pictures as it will probably be nine more years before I connect with a Hun again.
In the remaining brushy finger draws, we found multiple coveys of quail–from which we both took birds–and two more coveys of Huns, which flushed wild out of range (of course). I was extremely pleased with Misty’s performance. I dropped one quail in a thicket and found the pup standing over it with a huge grin on her face. With the success and the copious amounts of birds, I too felt a euphoric feeling.

The pup, Misty, locates a fallen quail in the thicket.

Shawn and I split up for a minute and my dogs and I went back down to the creek bottom. In a sage brush flat, I spied another top-knotted covey scurrying through sage. We pursued and the covey flushed presenting an easy shot. Sunny Girl made a nice retrieve.

The dogs and I took a moment to sit in the October sunlight and bask in the moment. I thought to myself: Could this day get any better? As we rested, the pup stuck her muzzle in the full game bag. At the time, I did not think much of it. I figured she was just excited about her new found passion.
Shawn and his dogs soon approached and rested and refueled for a minute.
“What do you say we go find that Chubby Covey?” I asked with a smile.
“Sure,” Shawn answered.
However, as we hiked up the main creek bottom, we did not find the birds as we expected. By this time, we both began to feel some fatigue.
“Where are those darn birds?” I asked puzzled.
“I have no idea,” Shawn replied.
“Let’s go hunt this finger draw off to the right.” I suggested with a gesture of the hand.
“Okay” Shawn replied a little less enthusiastically because of the steepness of the terrain. This area was more akin to chukar country than valley quail habitat.
As we got to the base of the steep draw, Shawn complained, “I don’t know if I can make it. I’m getting tired. Should we start hiking back to the truck?”
Right at that moment we heard the tell-tale: Chiquita, Chiquita, Chiquita. One solitary quail called from up in the steep, brushy draw.
“Stay the course brother! There are birds in that draw.” I exclaimed. This was enough to give us both the energy to keep hiking.

This picture was taken from the top of the draw where we found the Chubby Covey. The hike was well worth it.
Upon reaching the first brushy clump, Shawn’s setter, Gretchen went berserk and uncharacteristically started busting birds out of every likely looking place. In her defense, it was pretty hot. Every brushy clump held 10 to 20 birds. We had found the Chubby Covey. Some of the birds flushed up into a plum thicket on the crest of the hill. Others flew into some sparse grass below the thicket. Pretty soon all of the dogs were locating and pointing birds. It was pure bedlam. I hiked up to the plumb thicket hoping for some shots, but the crafty birds would bail out on the side opposite from wherever I happened to be as I circled the large thicket without presenting me with a shot.
I then decided to go down to the steep grassy area where a large part of the covey had lit. This was the ticket as these birds held extremely tight like their cousins, the bobwhite. Sunny and I had a field day kicking up quail and for once, I dialed in and made some consistent good shots. Sunny girl marked and retrieved numerous birds.
In fact, the action was so fast and furious that I quickly ran out of shells, which left me begging Shawn, “PLEASE let me borrow some of your shells!”
“That’ll be a buck a shell,” Shawn laughed as he gave me a handful from his vest. With Shawn’s shells I harvested my last bird over my pup’s point and she even retrieved it for me. This was the icing on the cake.
After 8 ½ hours of action, the hunters and their dogs trudged back toward the truck tired and shaking from hunting in the fast lane. We stopped for a moment to clean the birds and as I went through my game bag I couldn’t find the Hun that I harvested that day. I had no idea where it was lost, but thought that maybe Misty had removed it from my bag while we rested earlier. Arggh!! There was no use going back to look for it as we had covered four or five miles that day. Hundone again! At least I had a picture.
Despite my ongoing bad luck with Huns, the sheer number of quail between us was more than enough. This was one of the best hunts we had ever experienced together. With a huge grin, Shawn said as we pulled away: “I would rather hunt these birds than any others. There’s nothing quite like valley quail. You can tell that the dogs love every minute of it too.”
And indeed they did.