Skip to content
Last October, I spent a week with my brother Shawn and our bird dogs hunting throughout Southern Idaho. In short, it was the best hunting week of my life. When I finally made it home, I wrote down some memories from the hunts. This next series of posts on Upland Equations will follow this epic week day by day.
DAY ONE: OF CLIFF DIVERS AND WHIFFERS
It was 2:00 p.m. Saturday afternoon and my family and I had just made it down from Idaho Falls to my parent’s home in Rupert, Idaho, which is a 120 mile drive. Shawn, who was traveling from near Denver, had a much longer trip, and we beat him there.
I had no expectations of hunting that day, but upon arrival, my parents quickly announced that they had a church function to attend and they would not be around that evening. This sent the brain to scheming: Hmm . . . No parents, no family obligations, maybe we can squeeze a hunt in when Shawn gets here.
Not five minutes after Shawn’s arrival, I eagerly asked him, “Mom and Dad have a church thing to go to. So, do you want to go hunting? I know a place not too far from here. It’s some of the best blue grouse country I’ve ever hunted.”
“That sounds good to me.” Shawn replied. Despite being in the car already for over ten hours that day, Shawn was ready to take to the Idaho uplands with the bird dogs.
After begging leave of my wife and kids, we headed for the nearby mountains. It felt good to leave civilization behind and climb up to over 10,000 feet above the timber. 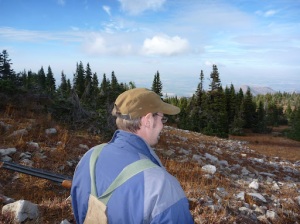 Andy drops off the ridge into the timber.
“Let’s hunt over on this north-facing slope where I’ve found birds in the past.” I suggested.
We parked on the top of the ridge, released the dogs, and dropped down into the timber. Shawn hunted all three of his dogs, Ellie, a field bred Cocker Spaniel, Geppedo, an English Pointer with no tail, and Gretchen, an English Setter. Both Sunny, my French Brittany, and Misty, my American Brittany came along too.
With Shawn and his dogs about seventy-five yards below me, we all side-hilled toward the mountain peak. In the Snake River Valley below us, we could see the patchwork of farms and also the circular areas indicating irrigation pivots for those in the know. The thought crossed my mind that they looked a little like UFO landing sites.

The view of the Snake River Plain below us. Notice the circular pivots.

Overhead was a murder of jet black crows circling ominously in the gray skies—a testament of the not-far-distant Winter. I heard a crack of a shotgun blast below me and thought that Shawn must have dropped a blue grouse.
“Did you get one?” I yelled.
“Yeah, a crow.” He replied, “I hate those dang birds.” Maybe this is why they call a flock of crows “a murder of crows.”
“Ah, man! I thought you found some blue grouse. Let’s go find some real birds to hunt.” I complained. In Shawn’s defense, it was open season on those noisy buzzards.
“Ellie, won’t even touch this thing.” Shawn hollered back regarding the dead crow.
Shawn and I worked through the timber towards the peak and had to cross numerous treacherous boulder fields, evidence of time’s harsh work on this ancient mountain. In contrast, the crest of the mount was dotted with numerous unsightly radio towers and little concrete buildings, which did not fit the grandeur and beauty of this alpine setting. Notwithstanding, I usually find birds right up by those manmade structures so I try to look on the bright side of them being there.

As we approached the ridge, we began to see more of the tell-tale piles of droppings showing that grouse were close. The dogs were a little ahead and Misty bumped a blue grouse that dove straight down a 1000 foot cliff leaving no chance whatsoever for a shot. Writers always talk about the merits of chukars on the wing, but this shot would have been more difficult than any chukar shot I’ve ever taken (and most likely missed). I gained a whole new respect for my favorite game bird, the dusky grouse.
By this time, the sun was beginning to lower. We had just enough time to get back to the truck and travel to a covert that I like to call the “Piney Strip,” which is on the south-facing ridge of this flat-topped mountain.
This is the very edge that where the blue grouse cliff-dived. 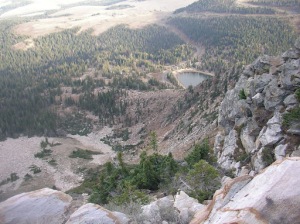 “What do say we try one more place?” I asked.
“I’m game.” Shawn replied with a smile. Like me, Shawn also loves to hunt blue grouse and does so each fall in Colorado. In fact, Shawn started the 2010 hunting season 7 shots for 7 blue grouse. That’s 100% for those of you not mathematically inclined. My friends, that’s good shooting in anyone’s book! It’s hard to beat perfect.
As we hiked into the Piney Strip, I pointed out where I had seen birds in the past. Almost as if on cue, a blue grouse got up right in front of me presenting a beautiful, easy shot. Of course, the bird flew right at Shawn so I couldn’t shoot. However, Shawn had an easy chip shot. With Shawn’s record for the year, I thought: That is a dead bird. To my astonishment (and his I’m sure), Shawn whiffed the shot.
“What happened?” I asked with a grin.
“That bird flew right at me. . . I always miss that shot.” Shawn sheepishly replied.
“Glad it was you and not me.” I laughed as we headed back to the truck while the embers off the setting sun glowed like the coals of a waning campfire.
“Let’s go get some tacos!” Shawn suggested.
“You don’t have to twist my arm.” I agreed.
Pursuant to Shawn’s request, we stopped at our favorite taco wagon in Burley, El Mirador. The tacos were so good we both ate six apiece, a meal fit for kings. I figured Shawn needed a meal like that to go with the dessert he had been served up earlier: You know, that big slice of humble pie. 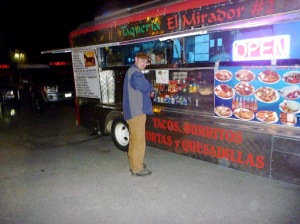