People just don’t say things or write them the way they used to.  Not to dwell on nostalgia…but we live in the days of instant gratification…the days of go big or go home.

I recently finished a great book on 1776 giving the first hand accounts of General George Washington‘s first year as the commander of the Continental Army against the British.  American and British troops took months and months to prepare for war…in this day and age, we’re ready anywhere in the world in 18 hours or less (Airborne!).  Today’s soldiers (God Bless them) would be bored out of their noggin if they had to wait months to wage war.  So would the news press and the general public.

Anybody that knows me, knows that I love old books.  My favorite place in Washington DC is the Library of Congress who has Thomas Jefferson’s collection of rare books on display…Jefferson was a man of my own heart.  He too loved books…and, it’s been rumored ,that he liked to bird hunt including migratory woodcock.  But, that’s another story for another day.

Enough of my rambling… 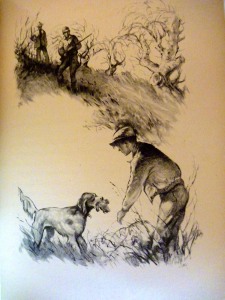 I recently re-read a classic on bird dogs and bird hunting of the 1940’s by gun dog author Raymond P. Holland.   Mr. Holland grew up in Kansas and was the editor of Field & Stream during what was consider the magazine’s heydays.  He wrote many great books on bird dogs and upland hunting among my favorites being My Dog Lemon, Lemon Runs Again, and Seven Grand Gun Dogs.  My favorite stories he details of bobwhite quail hunting in the 1950’s in Cuba during Castro’s acquisition and of traveling to Lenora, Kansas via rail train with his pointers Nip and Tuck to purse greater prairie chickens…the same country I too have fallen in love with.

The Master was written in 1946 and was neatly illustrated by Everett S. Ward (blogger’s side note here:  I could not find any information on the illustrator via google search).  The book is about a 12-year-old boy who has a natural talent and way with animals.  The plot is set in the World War II era south of the Mason-Dixon when many of the townsfolk were sent off to wage war on Hitler‘s armies in Europe.  The boy’s father is left at home to train too numerous field trial All-Age dogs without the help of his sons that are off defending mother Liberty.  The book is a great read and should be an addition to any complete outdoor sporting literary library.

Here’s an excerpt from The Master:

“There stood The Master, Pointing a covey of woods birds with a steel trap fastened on his front foot!  When none of the scouts or the gallery had found him, he made his way out to the field, looking for Bud to take him back to the birds.

As soon as the judge came in he told Bud to be quick and get the trap off the dog’s foot and to put a leash on him and take him up.

‘But, sir, please Mr. Nash,’ Bud protested.’  He can still run, and time isn’t up yet.  The trap hasn’t hurt him–much.  He could finish alright.’

‘Time is up for him today, and you’re pretty tired yourself,’ said the judge.  ‘When we get out of here and you get up on your horse, I’m going to put The Master up on the horse in front of you, so he can ride down to the road where the cars are waiting.”

The interesting thing to me in this piece is the mentioning of Mr. Nash…this has to be none other than Mr. ‘Bo Whoop’ Nash Buckingham his-self!  Back in the days when bird dogs and field trials meant as much to the men and women of the South as did the words of Life, Liberty and the Pursuit of Happiness.  Bird dogs are Happiness! 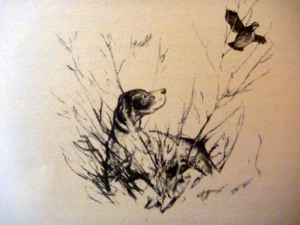