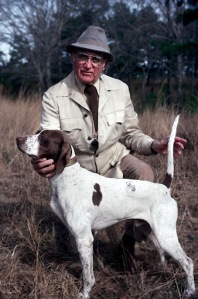 Gundogs By Tom Davis…reprinted with permission by Bernard & Associates from July/Aug 2010 Sporting Classics…Tom Davis is one of my heros and a heck of a fine writer! I hope you enjoy this piece as much as I did!

Twenty years as a Sporting Classics columnist has enabled the author to share unforgettable moments with some of America’s greatest dog men.

It was such a thrill to listen to men like these tell their stories. As someone who’s always felt he was born too late, it was a window onto an all but vanished world.
I was privileged to watch the great spaniel trainer Dave Lorenz handle a dog in competition on one of the last occasions he entered a field trial. He was a hard man to get to talk about his career and his accomplishments, although they spoke eloquently for themselves: four National Springer Championships, 15 National placements overall, 23 Field Champions. After my column on Lorenz appeared, I got a letter from a younger pro who told me that Lorenz – a man he held in awe – had gone out of his way to help him when he was starting out. That’s the kind of class Dave Lorenz had.
Still, no one exemplified class, in every word and deed, like Bob Wehle did. No one hewed to a higher standard as a sportsman and a dog breeder; no one was more generous to those he considered deserving (or had less time for flatterers and bullshit artists).
I treasure the time I spent in Bob’s company, walking puppies (while he flicked his ever-present wing-on-a-string to evaluate their pointing style and intensity), talking about the past, present and future of Elhew Kennels, and simply relaxing in the rustic, cottage-style homes he and his lovely wife, Gatra, shared in Alabama and upstate New York.
There are two honors I’ve received in my lifetime that I’m terribly proud of. One was being asked by Bob to contribute a Preface to his book Snakefoot: The Making of a Champion. The other was being asked by Gatra to speak at Bob’s memorial service. The latter was perhaps the toughest assignment I’ve ever had –nothing I said could have done justice to such a man –
but I managed to make it through without breaking down. Then, on the way out (Earl Crangle was with me), we stopped to say goodbye to Snakefoot, and when the old champion tottered out of his kennel and pressed his gray muzzle against the wire, the emotions I’d held in check came out in a flood.
It was the same a couple winters ago when I finally met W.C. Kirk, the trainer and handler of the dog that burns brighter in my imagination than any other: Johnny Crockett, the last English setter to win the National Championship. I’d wanted to meet Mr. Kirk for 40 years – it’s not stretching things to say he was one of my boyhood heroes – and when he opened the door of his home outside Bowie, Texas, and greeted me in his kindly drawl, the words wouldn’t come. I had to turn away, pull a handkerchief from my pocket, and try to compose myself. My eyes, you see, had unaccountably filled with tears.
That’s funny: They’re doing it now, too.