The old ways are often the best. Even better are old ways just discovered and renewed!

How to keep Pride, the three year old English Pointer, conditioned during the off season in a densely populated urban environment and further, one in which even if a little land can be found, rattlesnakes abound and it’s just too dangerous to let her run, that was the question?

Enter the good old roading harness. I always thought roading was a technique utilizing harnesses and lines to tie dogs to sleds or wagons for pulling to keep in condition, and that they had to run!

Not so! I was reading the instructions for the harness I ultimately bought at

and discovered the following:

“ROADING HARNESSES ARE DESIGNED FOR EXERCISING YOUR DOG. AFTER PUTTING THE K-9 KOMFORT ROADING HARNESS ON YOUR DOG, SLOWLY WALK HIM DOWN THE ROAD. ALL OF THE PRESSURE MOVES TO HIS CHEST AND TAKES THE STRAIN OFF OF HIS NECK.”

Slowly walk the dog? Would it work?

Here’s what it looks like in practice—and she is pulling! 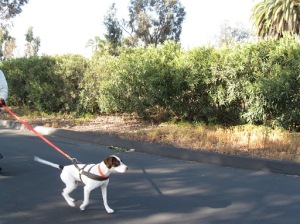 We do this now every morning for 30-45 minutes. It is a terrific workout for Pride, and for me! I am carrying a 10 pound weight to strengthen my arm, to emulate a shotgun. I switch arms every 5 minutes or so or whenever the “pulling arm” gets tired. We walk on trails and gravel roads in a wild area near our home. The fields would be great to run her during the winter but now are choked with the enemy of all bird dogs–foxtail! Plus, a goodly supply of rattlesnakes. The trails and roads are wide enough to see any creepy/crawly things well ahead so we are safe enough.

For those of us stuck in urban areas who need to keep an active, energetic and lively canine friend in shape for the next season, may I recommend roading? The harness I bought that is described at the website above is one of many. I like this one because it is a.) all leather and cleanable and b.) stoutly made. Don’t think a 38 pound Pointer bitch can’t pull! She is all muscle and bone and has tremendous strength. I hope this is going to keep her fit for next season. I’ll report on the results in November, if she doesn’t wear me to a frazzle in the meantime.