Some of you know, especially Scolopax, that I had made arrangements to import a gun from Scotland. It is a used AyA XXV 12 bore in the Churchill style with high, raised rib. I already had the boxlock version and wanted the sidelock. Graham Mackinlay of Glasgow, Scotland had one that was made in 1967, well before AyA started to cut corners on the engraving. The one I bought from him has exquisite engraving and about 85% case colors so the patina shows off the ribbon, rose and scroll to best advantage. Here are my “fraternal twins” now: the boxlock and the sidelock. 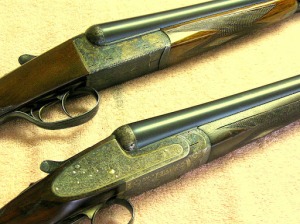 They will have identical stock length once the recoil pad is installed on the sidelock. The LOP is 14¾”, one is straight and one is slightly cast-on for the lefty, me! They both weigh in around 6# 6 oz and are choked ¼ and ½ in the boxlock and ¼ and ½+ in the sidelock. I have waited forty years for this dream to be fulfilled and now it has been done. Thank you Shawn and all the others who encouraged me to start hunting again, to get Pride the Wonder Dog and these beautiful guns. I have even learned how to shoot a double trigger gun and not be so klutzy that I can’t find the second trigger!!