I’ve been blessed with some great reviews of my book, Heaven on Earth: Stories of Fly Fishing, Fun & Faith, and I have appreciated all of those reviewers that have taken the time to write about it.  Peter Ryan, the author of Wild South: Hunting & Fly Fishing the Southern Hemisphere, which I coincidentally reviewed a few months ago, graciously agreed to review my book.  Peter is the first person in New Zealand to review it and I must admit, it’s cool to think that it has crossed the Pacific Ocean and fallen into the hands of a fellow Mad Trouter and Bird Brain.  While I mean to take nothing away from any of the other great reviews, this happens to be one of my favorite:

It’s refreshing to find a book that delivers exactly what it says. So many – and this is especially true in the world of fly fishing literature – get airplay they don’t really deserve. Put simply this is a series of essays exploring the author’s obvious enjoyment of fly fishing and the moments he spends doing what he loves with friends and family. Both are, for him, an affirmation of faith. To some the inclusion of religious beliefs in a book on angling might seem out of place, but it’s in keeping with a long tradition, ranging from Norman Mclean all the way back to Izaak Walton. Wayment’s faith is a little different to mine, though not in any of the ways that really count, and in a world full of self-proclaimed experts, thinly-veiled product placement and clunky sponsorship deals, the man who finds pure wide-eyed wonder on a trout stream, no strings attached, is a rare fellow.

Wayment’s sense of awe at the natural world and the beauty of fly life is obviously genuine. That’s not to say he’s a simple man. Like John Voelker (‘Robert Traver’) his education and training is in law, yet he remains opposed to litigiousness, and sees the shortcomings of his profession only too clearly. He’s no idle loafer either – as a father of six he has to work hard for his time outdoors.

I enjoyed his wanderings around the legendary destinations of American fly-fishing lore – the Madison, the Henry’s Fork, and a host of less known names. His hard-earned knowledge is imparted gracefully, without self promotion, and speaks clearly of a humble soul.

‘Heaven on Earth’ will never challenge the 400 page technical texts on fly tying, nor is it intended to. It is what it is – a sentimental journey, inspirational in parts, that takes us into the world of a genuine man. You can only rate a book for what it is intended to be, and in this case it aims to tie life on the stream, life at home and a spiritual life together. In that it succeeds admirably.

Finally, it ticks the boxes on questions that much more famous books cannot. Would I go fishing with the author? Yessir, I would. Would I let him defend me in a court of law? Yessir again. Would I trust him with my kids? Again, yes. Not too many authors pass those tests. Hardly any, in fact. Such is the measure of the man. 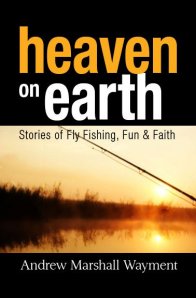 Wow!  Thanks again, Peter, for taking the time to review my book and write this review.  I am both honored and humbled.  The feeling is mutual.  I would love to spend a day astream or afield with Peter Ryan in the Southern Hemisphere!

For any interested, limited paper copies of Heaven on Earth are still available at the book’s website, www.heavenonearthbook.com, but the book is otherwise currently out of print.  In the near future, I plan to get the book published through a new publisher.  For you techies, it is available in Kindle on www.amazon.com and in Nook at www,barnesandnoble.com.

Thanks for stopping by.