What do anglers hope to take away from a day of fishing?  I think many anglers would say they want to catch a lot of big fish each time they go out, but the reality is that big fish are tougher to catch and you’re not going to catch as many.  How do you think they got so big in the first place?  Oftentimes, the choice of where to go fishing boils down to a question: Do you want quality or quantity?  In other words, do you want to catch a bunch of smaller fish or would you rather catch one or two big fish?

Since I started fly fishing over twenty years ago, I have been all over the spectrum at one time or another.  As a greenhorn, I just wanted to catch as many fish as I could and size didn’t really matter. And then, I learned about big rivers, streamer fishing and big fish and that became my passion for a few years.  Lately, I’ve been content to fish smaller streams with a tenkara rod and have enjoyed the simplicity and the solitude.

Last weekend, the quality vs. quantity question came to the forefront.  I had my heart set on fishing a small creek near the Wyoming-Idaho border.  Let’s call it, “June Creek.”   In my experience, a few big fish run up this creek from another famous fishery and I find them when the runoff starts to drop and the water clears in early June.  It’s a fun creek where you can experience both quality and quantity without the crowds.

Friday night I asked a good friend to come along, but he wanted to fish the Henry’s Fork.  He texted me later that night, “Hmm, I think I’d rather float. What say ye?”

My friend shot back, “Or fish over 6 inches on June Creek.”

“I feel pretty confident they’ll be there.” I texted back.

I had my mind made up that I would go to June Creek, even if it meant going alone.

Here I faced a dilemma.  I seriously wanted to fish June Creek and felt certain it would be good.  However, I also wanted to fish the famed Green Drake Hatch on the Henry’s Fork.  What to do?

“Alright, I’m in,” I reluctantly responded.

We didn’t make it to the river until about 10:00 a.m., but we immediately observed multitudes of fisherman and drift boats.  After all, it was “Free Fishing Day” in Idaho. Furthermore, the skies were overcast and a steady wind blew, which is not the best weather for drakes.  Admittedly, I was a little disappointed, but I tried to shrug it off and make the most of the situation.

We saw a few drakes hatching, but the constant wind must have put the hatch down.  There were times we thought that the Green Drakes might erupt because of the birds hovering over the river, but the hatch just never took off.  All said, we boated two good fish that rose to drake patterns.  The fish that I hooked was a dandy and he gave me a good fight.  I thought he might break my rod when he tried to duck under the boat, but the Winston held.  I was thrilled about catching the fish and stated out loud, “That fish just made my whole day!”  Other than this three minutes of thrilling action, the day was pretty uneventful (except for the hook in my ear from my friend’s son . . . Ouch!!!). 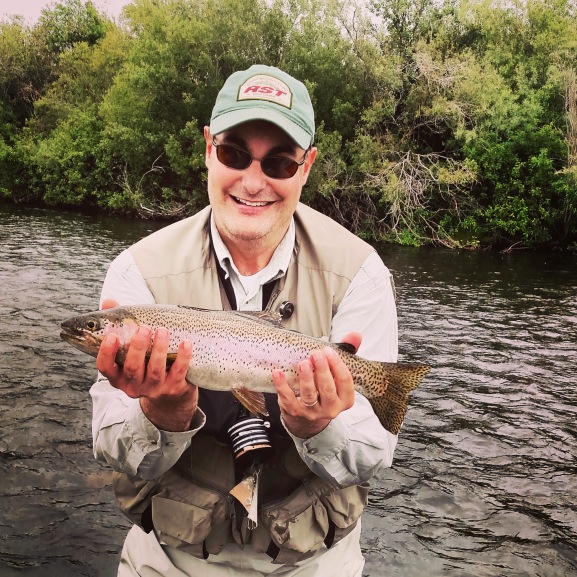 In reflecting on this experience, I have wondered what I missed at June Creek and considered where I would rather have been that day.  There was a time that I would have chosen the one big fish on a dry fly over 20 small to middling trout any day.  However, I can’t say that anymore.  As much as I enjoyed catching that big fish, if I had to do it over again, I would probably choose the solitude and the smaller fish of June Creek.  Heck, there may have even been a chance at a few nice fish that day.  So why the change?

Henry David Thoreau is attributed with saying: “Many men go fishing all of their lives without knowing that it is not the fish they are after.”  So, this begs the question: What then are we fishing for?  I’ve come to realize that the answers may vary widely, depending on the individual.  For me, at this stage of my life, I am fishing for a memorable experience, a moment of peace in a troubled world, a few spikes of child-like thrill, quality time with my children, and a few moments of grace.  These are the qualities that I seek while fishing.  The fish are now only a part of the equation, not the equation itself.  I am not arguing that these qualities cannot be found on famous (more crowded) rivers.  Rather, they seem  easier to find lately on lesser-known creeks.