But yesterday’s performance was in the realm of surreal. At the end of my hunt with Pride the English Pointer our game club manager caught up with me in the field and said “Meet me over near the west gate. I put a chukar out for Digby.” I was to be the gun. Now, I have shot over Springers and Lab’s many times, but a flushing Dachshund?? Never.

Sure enough, when I got there Andy and Digby were marching through the high desert brush. As we neared the end of the cover, as the grassy area began, I watched Digby intently. He was hunting! Suddenly the little pointed nose swung around and he dove into a bush. He had smelled that chukar. The bird beat a hasty retreat and I made certain that I hit it. Down it came and a furiously running Dachshund was right after it.

Digby grabbed the bird, rolled it over several times to find a handle and then started back to Andy, head high, with bird wings dragging on the ground. Gee whiz, his legs are only about three inches long! I had no camera yesterday but here’s what the retrieve looked like from an earlier episode with a chukar that was just thrown for a retrieve last week: 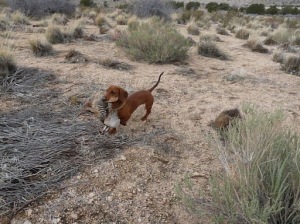 (My thanks to good friend Jack Brewton for the photo)
The annals of gun dog-dom are being re-written and a long chapter will be added for Dachshunds. Gee, I wonder if there is such a thing as a Dachs-setter? Only selective breeding will ever let us know!

Oh, Pride and I had a nice time. Great workout on a beautiful day. However, she doesn’t think much of Digby. I think she’s jealous. Digby gets to ride in Andy’s coat when he’s on the club quad 4-wheeler. She doesn’t.

Tune in next week. Maybe he’ll retrieve a pheasant????