This past weekend, I had the opportunity to go hunting together with my father and my only son, six year old Tommy, for the first time. Also, for the first time in fourteen years, I drew an antelope tag in an area that happens to be one of my family’s favorite areas to go fishing. Dad and I had fished the creek many times together in the past. While I was scouting for antelope in this area in August, we ran into multiple sage grouse around some water sources. Thus, for me, this hunt was going to be a cast and blast extraordinare featuring: (1) fly-fishing, (2) big game hunting and (3) sage grouse hunting. Can life get any better? I submit that it cannot!

The fishing on Thursday (the day before the antelope opener) was fun as I let Tommy excitedly reel in most of the fish I hooked. My Dad–who had been through shoulder surgery to repair his rotator cuff in the past–fished for the first time in three or four years and he enjoyed it tremendously. Before this time, I seriously wondered if I would ever fish with Dad again. 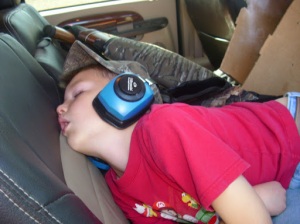 Little Tommy crashed in the back seat while we drove over bumpy two tracks scouting for big antelope bucks on Thursday. By the looks of things, it was a nice and quiet–but uncomfortable–rest. 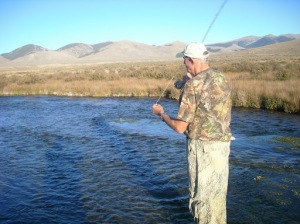 Dad takes up the fly-rod again for the first time in years.

Little Tommy reels in a trout. “The fish is giving me a good fight!” He exclaimed.

As my brother Shawn so aptly made fun of me and my small buck: “[You’re] takin’ tomorrow’s trophies today.” During this hunt, Tommy lived with his ear protection on.

Friday, after hunting hard all day, I settled on taking this smaller buck. Despite his size, I was excited to be successful and for Tommy to be there when it happened. We are having the meat made into jerky. . . mmm, mmm good!
For the third and final objective, Tommy, Sunny, and I looked for sage grouse along some creeks and canals Saturday morning, but did not find any birds. We still had a fun time as we talked and observed the small things that catch a kid’s attention.
Tommy Boy, fellow Grouseketeer and future birdhunter, holds my shotgun as I cross the fence. Someday, he’ll be able to wield one of those things for real. This hunt was the start of good things to come! 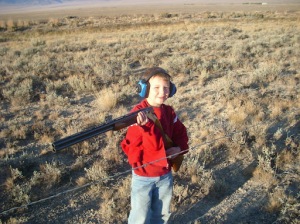 While out looking for sage grouse, we found this cool snake skin.
Well, with the lack of any mega grouse, we did not accomplish everything that I set out to do. However, in the timeless words of Meatloaf: “Two out of three ain’t bad!” In reality, spending time in the outdoors with my Dad and my son together for the first time is a milestone in and of itself. Undoubtedly, my father is the man behind my passion for the outdoors. I grew up witnessing his love and excitement for hunting and fishing every time we stepped foot into the great outdoors. Taking Tommy along for his first big game hunt with my Dad felt like things had–in a way–come full circle. Again, two out of three ain’t bad . . . it was awesome! I would not trade this memory for anything.