>Colorado’s weather can be crazy…to say the least. Yesterday was beautiful Spring weather the kind that’s made for chasing wild turkeys in the high country! Today is the exact opposite! It’s cold and rainy…could even snow! It’s been awhile since my last blog post…work has been extremely nuts which I’m grateful for in this crazy, unpredictable economy. I’ve had my mind on chasing wild turkeys…day and night. I missed 6 times with my bow in Kansas for various comical reasons…it’s much tougher than it looks on those outdoor shows. I had the absolute time of my life! April first was made for chasing long beards with a stick and string…I’ll be in KS next year!

I had a very nice tom coming to my decoy last Thursday night in Southern Colorado, but whiffed the shot with my Thompson Center Encore at 50 yards down hill…he’d have came right to my decoys but a truck was coming down the road and the bird was ready to blow out of there. I’ve been practicing 50 yard shots and felt fairly confident…I shot clear over his head. So much for practice.

The turkey-monkey (a term coined by my friend Julian) was finally removed from my proverbial back yesterday in the Sangre De Cristo Mountains of Southern Colorado when I harvested a nice rough-necked gobbler. I didn’t even have to use a Claymore mine loaded with cranberries as was suggested by Julian!

I woke up late…which put me at my spot (5:45 am) after the birds had hit the ground. I’d figured that I’d missed the prime time for locating a gobbling tom, so I sat back against the tree and started day dreaming. To my surprise, two hens came off the ridge behind me and strolled right past where I was sitting…they were 2 feet to my left as they passed me. Those beautiful gals starting their seductive clucking and purring while I just sat motionless against the spruce tree. Within 5 minutes, a love-sick tom was gobbling and heading my way on the logging road to my right. When he appeared in full strut, I almost laughed out because he only had 4 feathers in his fan…he was displaying what tail was left his very best! It was all over by 6:30 am. When I shot him, 2 other gobblers were on their way to our location…they both gobbled at my shot. My first thought was that this tom had been fighting with the other birds for dominance…hence the loss of the tail feathers. As I approached him on the ground, I noticed a large abrasion on his thigh the size of my fist. Gobbler fights? I’m not sure! Possibly a predator was trying to capitalize on a love-sick gobbler…this one escaped by the feathers in his tail!

This story has an interesting interlude…while I was hiking in the back country later in the day, I came across a grave site on National Forest Lands in the absolute middle of no where…an eerie, hair-standing-on-the-back-of-my-neck feeling of someone watching drifted over me! How I stumbled onto this place is beyond me! I don’t think I could find my way back to Dottie’s Resting Place even if I wanted to! Finding Dottie’s Ridge has made me reflect on my own mortality…I’d like to be laid to rest at the foothills of the Sangre De Cristo Mountains with my beloved bird dogs and my Filson boots laced…listening to Merriam’s carrying on their Spring ritual. 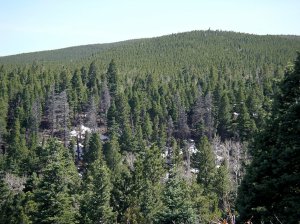 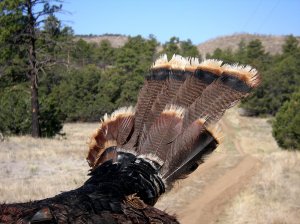 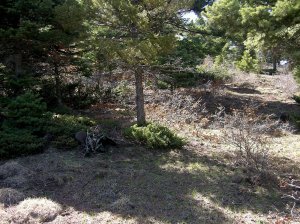 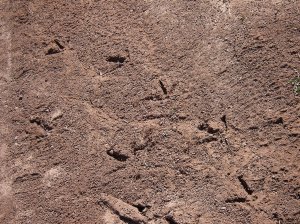